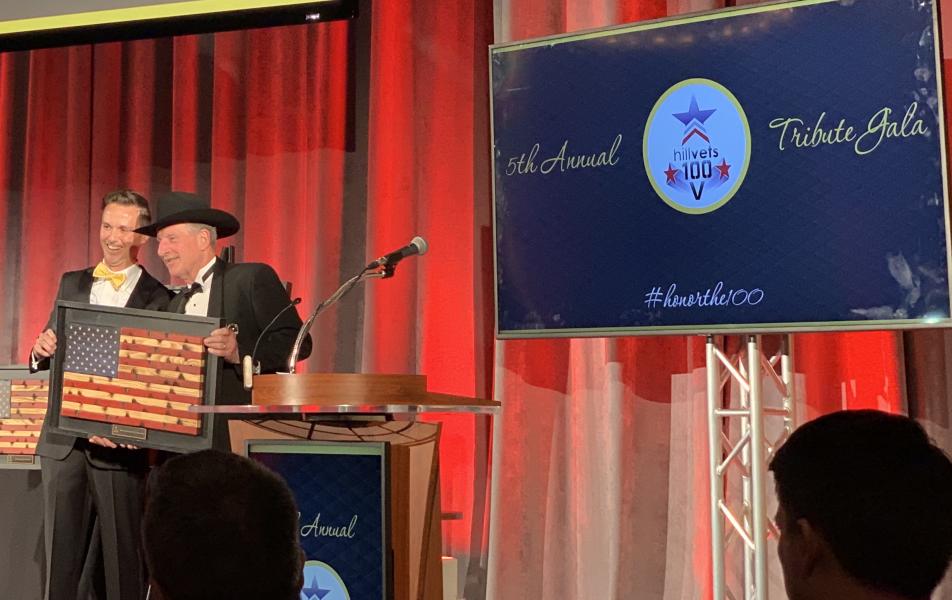 The Hall of Flags at the U.S. Chamber of Commerce, a stone’s throw from the White House, was packed with veterans, public servants and corporate executives last week, all gathered to honor the best and brightest in the veteran’s community. The occasion was the annual HillVets 100 Gala, a prestigious night of recognition and empowerment, and the franchise community was front and center. At a packed table of ten, IFA members, supporters and staff gathered to celebrate one of our community’s most dedicated servant leaders – Gordon Logan, the CEO of Sport Clips. Gordon received the Philanthropist of the Year Award, in recognition of his tireless service to veterans, while his company, Sport Clips, was recognized as one of the top six businesses in the country that support veterans.

Gordon was recognized for his decades-long commitment to veterans through initiatives such as the Veterans of Foreign Wars’ Sport Clips Help A Hero Scholarship program, which has provided some 1,300 scholarships totaling $5.5 million to service men and women and veterans pursuing their education and training goals. The company is also a national sponsor of the Ageless Aviation Dreams Foundation, which has provided more than 3500 dream flights in Boeing Stearman biplanes for seniors and veterans living in long-term care facilities. Gordon has made support for veterans central to his personal, professional and philanthropic life for the past 25 years, and will continue to be a stalwart champion for veterans for years to come.

Joining Gordon at the black tie gala was the CEO of IFA, Robert Cresanti, who was recognized from the main stage for the great work of the IFA and VetFran – work that Gordon himself has supported and made possible through his service on the VetFran Committee and his sponsorship of the program. Robert was proud to attend and said “Gordon Logan embodies the spirit of generosity and commitment to veterans which has been a core value of the entire franchise community over the last quarter century, and his leadership by example is inspiring the next generation of VetFran leaders, volunteers and partners.”

Also in attendance were Moran Family of Brands CEO Barbara Moran-Goodrich and her husband Paul, Matt Gerding of Home Helpers Home Care, Guy Darter of Darter Specialties and several IFA staff members. Friends and supporters of the VetFran program were also represented with Ron Spear of PenFed, Mike McDermott of the Arcadia Group and Bill Deutch of Hiring America coming out to support Gordon.

The VetFran program could not be more proud of this well-deserved recognition for Gordon Logan, and the outpouring of support and congratulations for him from the VetFran community.