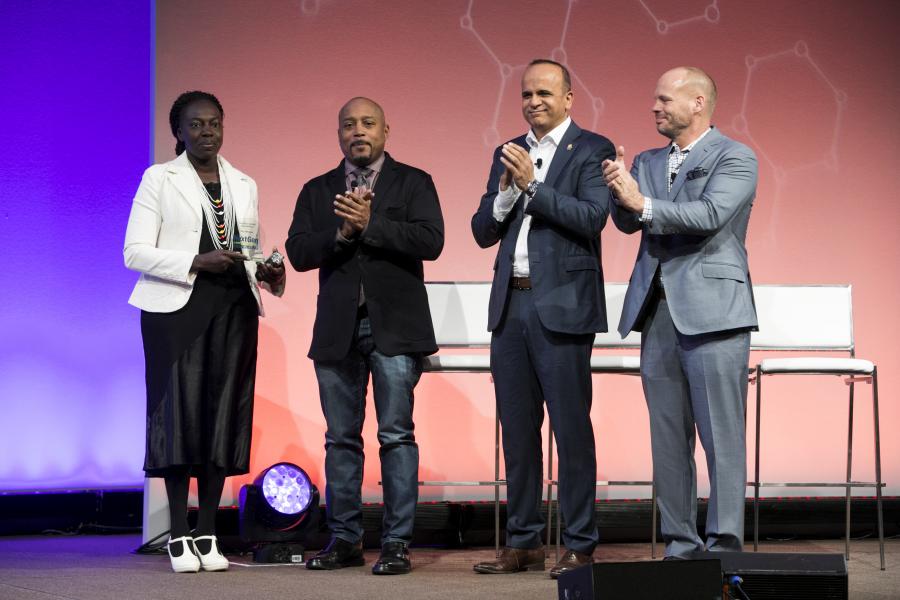 WASHINGTON – (Sept. 11, 2018) – The International Franchise Association (IFA) Foundation announced today that its Social Franchise winner of the 2018 NextGen in Franchising Global Competition, Stella Sigana, founder of Alternative Waste Technologies, has received an investment from Edible Arrangements® founder Tariq Farid via the Tariq and Asma Farid Foundation, a philanthropic, non-profit corporation providing support for worthwhile causes in the U.S. and throughout the world.

Founded in 2015, Alternative Waste Technologies is a social enterprise focused on tackling energy poverty in Kenya by producing clean fuel for cooking, while significantly improving the air quality in homes. The company produces fuel briquettes through conversion of organic agricultural and charcoal waste from slum settlements, resulting in a smokeless, odorless, efficient alternative fuel source. The $10,000 pledge from the Tariq and Asma Farid Foundation will help Sigana purchase the additional machinery needed to meet the increased demand for Alternative Waste Technologies’ product.

Earlier this year, the Kenyan government placed a temporary ban on logging and has cracked down on the production and trading of charcoal, driving up the cost and forcing millions of Kenyans who rely on the popular and once-affordable energy source to find an alternative.

“Seventy percent of Kenya’s population have relied on charcoal as their main source of energy in households, learning institutions, hotels, and restaurants, among other places,” Sigana explained. “Alternative Waste Technologies was initially formed to address the fact that 20,000 people — mostly women and children — die each year because of indoor air pollution. But now that the government is considering a complete ban on charcoal, we have a much bigger need to meet.”

Alternative Waste Technologies has grown to be the leading supplier of fuel briquettes in Kenya. To date, the company has recycled over 150 tons of waste into fuel briquettes for cooking and empowered 80 out-of-school youth and women entrepreneurs in slum settlements to build businesses by selling briquettes directly to communities.

“Stella is a brilliant young entrepreneur leading the way in solving a major issue in her country. Having spent most of my childhood in Pakistan, this hits home. Similar to Kenya, Pakistan has a major indoor air pollution problem. I remember how uncomfortable it was for the women in my family to spend hours indoors,” said Tariq Farid, who was one of three judges during the final round of the 2018 NextGen in Franchising Global Competition, which took place in Phoenix, Arizona, on Feb. 13, 2018. “When I saw Stella present her business concept at NextGen, I was drawn to her tenacity and energy and knew I wanted to invest and continue to mentor her as she grows Alternative Waste Technologies. In the coming months, we’ll also launch a non-profit in Pakistan to begin producing her briquettes and help local communities in my home country.”

Farid has established a GoFundMe page to help raise an additional $25,000 for Alternative Waste Technologies to expand its reach in Kenya and throughout Sub-Saharan Africa. To donate, please visit https://www.gofundme.com/alternative-waste-technologies.

“This is the mission of the NextGen program — to identify impressive, savvy young entrepreneurs poised for growth and to connect them with experienced leaders in the franchising industry that can help them achieve even more success,” said David McKinnon, CFE, 2nd vice chair of the IFA Foundation and chair of the NextGen in Franchising Committee. “We hope more founders of both traditional franchises and social enterprises will consider applying for the 2019 NextGen in Franchising Global Competition, so we can continue to support their development and fuel the growth of the franchising community.”

About the NextGen in Franchising Global Competition

About the IFA Foundation
Celebrating 35 years of education, research and excellence, the International Franchise Association (IFA) Foundation is a 501(c)(3) tax-exempt organization and supported through the generous contributions of IFA members and others. The Foundation’s mission is to advance franchising and the free enterprise system by increasing the knowledge and professional standards of all members of the franchising community; educating the next generation of franchise practitioners; increasing recognition of franchising’s key role in the free enterprise system; and providing comprehensive information and research about important developments and trends in franchising.

About the International Franchise Association
The International Franchise Association is the world's oldest and largest organization representing franchising worldwide. IFA works through its government relations and public policy, media relations and educational programs to protect, enhance and promote franchising and the more than 745,000 franchise establishments that support nearly 7.9 million direct jobs, $713.2 billion of economic output for the U.S. economy and 3 percent of the Gross Domestic Product (GDP). IFA members include franchise companies in over 300 different business format categories, individual franchisees and companies that support the industry in marketing, law, technology and business development.