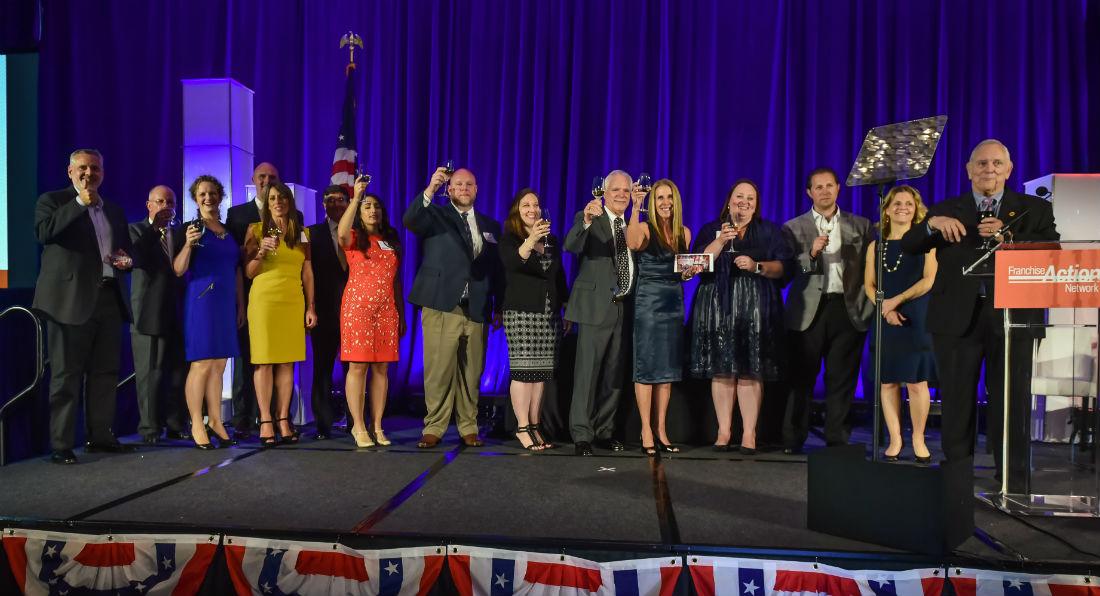 The IFA Foundation hosted the annual Franchising Gives Back Celebration and Awards Dinner on Tuesday night, Sept. 4. Within the franchising world, there are many businesses that team up with charities and nonprofits. Being part of your community means giving back to it, and this is exactly what so many of IFA member franchises do. IFA members have donated more than $245 million and 2.3 million hours to nonprofit organizations since the Franchising Gives Back program began in 2015. This year, the winners exemplify what it means to give back.

The 2018 Gold Award winners ranged from veteran recognition and care-package delivery to raising money and donations for domestic violence agencies. These franchises created wonderful and positive initiatives to help their community be a better place.

Philip Capozzi, Vice President of Non-Traditional Development at Jersey Mike’s Subs, discussed how company founder Peter Cancro has always said, “If I take care of my community, my community will take care of me.” This motto has been incorporated into the company’s approach to helping others.

“Giving back at Jersey Mike’s is part of our DNA,” Capozzi added. “That same philosophy and mantra is what we use at every store opening. It’s proven to be a very successful process. It engrains our store and our franchisees with that community-first approach immediately.”

The five Gold Award winners are:

This year's Silver Awards went to franchises that support causes such as the Intrepid Fallen Heroes Fund and the ‘Puerto Rico Renace’ (Puerto Rico Rebirth). Businesses involved with innovations in technology and improving employment resources were also recognized.

“Both of our co-founders are super passionate about giving time, talent and treasure,” explained Jillian Koeneman, CFE, Vice President of Marketing at Ben’s Soft Pretzel, referring to co-founders Scott Jones, Ben Miller and Brian Krider. “They’re always reemphasizing that to everyone on the team.”

Newton Cannon is an Area Representative for Crimson Enterprises, a Captain D’s franchisee. He said that Crimson Enterprises has always been involved with the local community, and tries to give back in many ways, focusing on supporting hospitals.

“This helps not only our local area, but almost the whole state of Alabama because it’s benefitting a children’s hospital in Birmingham, which everyone in the state utilizes.”

"You are more than just an employee or donator – you are making a true difference."

Koeneman gave an example of how dedicated Ben’s Soft Pretzel is to helping veterans for a good cause. During National Pretzel Day, all the employees at some stores donated their wages for the day to the fund as well. Nobody asked them to do it. This was something the employees did because they felt it was the right thing to do for the cause. “By being part of a franchise that gives back, you are more than just an employee or donator – you are making a true difference,” she said.

"Being part of your community means giving back to it."

The 2018 Silver Award Winners are:

• 1HUDDLE supporting the City of Newark and Newark Works, Innovation and Impact Award

With these winners mentioned above, it is important to keep in mind: every franchise that decides to become a part of a cause bigger than itself, to benefit the community and the people in it, is worthy of recognition. The franchise community would not be connected in the way without the generous support of those who give back. Join IFA in thanking franchises that are making a difference in your community.

Mary Hanula is a writer for franchise.org and Associate Editor of IFA's Franchising World magazine. She is a recent graduate of Christopher Newport University, where she studied English along with Civic Engagement and Social Entrepreneurship.